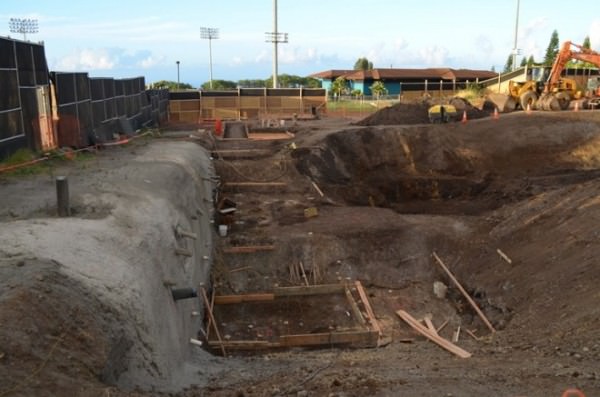 King Kekaulike High School in Pukalani, Hawaii is said to have one of the best performing arts programs with its drama, dance, and music concerts. F&H Construction built King Kekaulike High School 20 years ago and now has the privilege of adding its new Performing Arts Center. The 20,490 square feet building will include an orchestra pit with an orchestra lift, backstage scene shop and, make-up, storage, changing and green rooms. The theater will be able to seat 413 people. This Performing Arts Center is to help the performing arts program expand and become greater.

The ground breaking has started for the new Performing Arts Center. Goodfellow Bros. is currently on site performing improvements for the underground utilities. They are working on excavation of the footings/foundation to install sewer, water and drainage to the performing arts center. Mark LaTurner, project manager for Goodfellow Bros. stated that “F&H is great to work with. They are sensitive to subcontractors needs. They also share the same goals and worth ethic as us (Goodfellow Bros).”

Stacey Helm, F&H Project Engineer on site, said the most inspiring part of this project is “providing a theater for the community, where local student actors can spotlight their talent that will serve the community of Upcountry Maui for future generations.” The new Performing Arts Center is scheduled to be completed by Fall of 2016.